Our charity consists of volunteers who each have lived experience in dealing with the pain of murder, suicide and mental health issues

The selflessness of our volunteers is what makes FAMS truly special

It all began with a conversation between two colleagues; Meg McCloy and Kevin Queen. It transpired that both Meg and Kevin had shared the same traumatic grief after the death of a loved one, through murder or suicide.

Meg’s son, Steven McCloy, died through suicide at the tender age of 17 after being the victim of bullying.

Kevin’s cousin, Paul Gerard McGilvray, was murdered in a senseless, unprovoked attack by strangers when he was 20 years old.

Meg and Kevin shared stories of the shock, loss, grief and isolation endured by the families and friends of Steven McCloy and Paul Gerard McGilvray. They both agreed that they had found it difficult to find the practical and emotional peer support that they needed.

Kevin organised a meeting with two mothers, Meg (mother of Steven) and Roslyn McGilvray (mother of Paul). This meeting led to a thought, the thought then turned to a dream and then the dream evolved into a single goal; to offer support to people who had been in the same pain as their respective families, in a safe, confidential and non-judgmental manner. 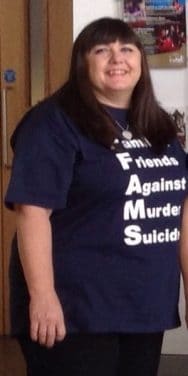 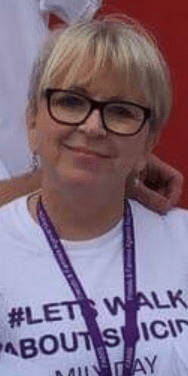 The journey to establish FAMS as a registered charity with the Office Scottish Charities Regulator (OSCR) was a steep learning curve for all concerned. However, driven by the desire to help and support others, FAMS soon had a Board of Trustees, an Accountant, a Constitution and most importantly – a sense of purpose. Our efforts were finally rewarded on 23rd October 2014, when we were awarded full charity status, No. SC045179.

Since then the charity has grown organically through the support of volunteers and members, every one of whom have been touched by the traumatic grief, devastation and isolation associated with murder and suicide. With the continued support of our sponsors and fundraising events, we aim to deliver a wide range of services that will include one to one and group counseling, telephone support, Befriender peer support, advocacy and practical advice.

It is the goal of FAMS to raise awareness about the serious issues of murder, suicide and mental health in our country.

Enough is enough. Our government has been lacking in this regard for too long. We need education in schools and beyond, and people need to be made aware of the societal issues that lead to such problems.

We will continue to petition the government to take action.

Each of our volunteers has lived experience, meaning we have been through something similar. This is what drives us to help others.

We operate a befriender service with peer-support to make everyone feel comfortable and welcome. You are never alone in your pain and with our help we hope to guide as many people as possible through what can be the worst times in their lives.

The stigma associated with having and seeking help with such issues is gladly disappearing, but not fast enough.

We offer support and guidance to any and all people who need someone to talk to.

Our mission is three fold:

Initially FAMS volunteers will operate a dedicated telephone help line as a first point of contact for anyone affected by murder or suicide. We also aim to provide group support and one-to-one Befriender support in the near future.

FAMS believe that bereavement from murder or suicide is a different type of grief. Known as Traumatic Grief, where others with the best intentions remain outsiders peering in, not knowing what to do or say to bring comfort. We acknowledge that bereavement is everlasting and understand that some believe that our loved ones are kept alive within our grief, therefore grief is necessary and has a purpose.

From the benefit of 10 years experience, it is our belief that only by talking in groups or in one-to-one conversations with survivors of this terrible grief, does discussion seem to bring some heartfelt relief and understanding. We find the most comfort in others whose experiences match our own. In extreme situations, only experience knows experience.

We will be updating our News Page with all of our upcoming events and general goings on, and we have an informational blog planned for all things mental health.

It would mean a great deal to us and help us out a lot if you could take the time to sign up to our mailing list to keep up to date with all things FAMS.

Subscribe to our newsletter to help us help others

Every person who subscribes helps FAMS that little bit more to do our important work.